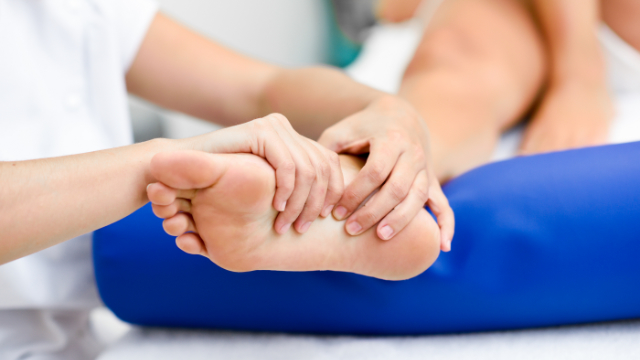 Many patients who sprain their ankle once have long-term issues

Ankle sprains are the most common injury in athletes and those who are physically active. In addition to the initial pain and disability that these injuries cause, up to 41% of patients who sprain their ankle once will go on to develop a condition called chronic ankle instability (CAI). Individuals with CAI tend to experience continual pain and soreness, and a sensation that the ankle is giving out. As a result, they are more likely to sprain their ankle again, which can lead to serious long-term disability. Exercise therapy is one of the more commonly used treatments for patients with CAI, with exercises that strengthen muscles and improve balance and proprioception (the sense of knowing where one’s body is in space) being most effective. Another popular treatment is called manual therapy, in which a physical therapist moves and manipulates certain joints in specific ways to improve their mobility and alleviate symptoms. In some cases, manual therapy will target the nerves as well as the joints and soft tissue of a region. Although research has shown both exercise and manual therapy to be effective for patients with CAI, no studies have evaluated manual therapy that focuses on the nerves of the ankle. For this reason, a powerful study called a randomized-controlled trial (RCT) was conducted to determine if manual therapy can provide any additional benefits to an exercise program for CAI patients.

Patients with CAI were invited to participate in this study and then screened with specific criteria to determine if they were eligible. This process led to 56 patients being included in the study and then randomly assigned to one of two groups: experimental group I or experimental group II. Under this design, all patients participated in an exercise program that took place for four weeks, but the experimental group II also received a course of manual therapy. The exercise program consisted of six exercises that were repeated during two sessions per week and got progressively more difficult each week. These exercises—which a physical therapist supervised—focused on strengthening the muscles surrounding the foot and ankle and improving each patient’s proprioception, which is closely related to balance. Manual therapy consisted of several techniques applied to the joints and nerves of the ankles, which lasted for 20-30 seconds each with two minutes of resting in between. All patients were assessed before each treatment program, immediately afterwards, and then one week later for a number of outcomes, including pain, strength, ankle instability, and flexibility.

Greater benefits are achieved when exercise is combined with manual therapy

One week after treatment ended, it was found that patients in both groups improved in all of the outcomes that were measured; however, patients in experimental group II experienced greater improvements than those in experimental group I. This was found to be the case in most of the measurements taken, but was particularly true for ankle instability and strength, both of which had scores that were considerably higher in the group that underwent manual therapy. These results suggest that although exercise therapy is capable of producing benefits in patients with CAI, adding manual therapy to this exercise program leads to even better overall outcomes. Individuals who suffer from CAI are therefore encouraged to see a physical therapist if this step has not already been taken. Physical therapists are movement experts that can diagnose your condition and provide you with a comprehensive, personalized treatment program involving these components that will set you up for a positive outcome.

-As reported in the December ’16 issue of Manual Therapy